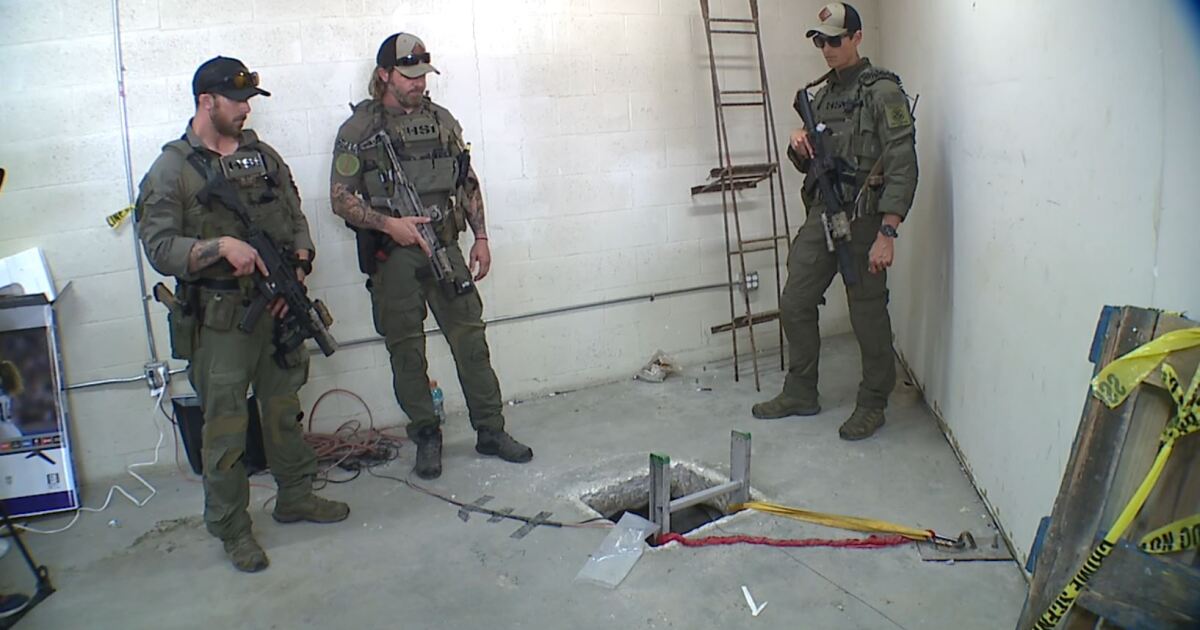 SAN DIEGO – The exit point to a complex cross-border tunnel, which federal officials called “fully operational”, was found early Friday in a warehouse, leading to six arrests and the confiscation of about 1,762 pounds of cocaine.

The tunnel stretches from a home in Tijuana, Mexico, to a warehouse in San Diego, federal officials said.

“It is estimated to be about 1,744 feet long, 61 feet deep, with a diameter of about 4 feet at its widest point,” said Randy Grossman, U.S. Attorney for Southern California. “It has reinforced walls, rails and electricity for ventilation.”

The warehouse is located approximately 300 feet north of the U.S.-Mexico border, east of the port of Otai-Mesa. Signs “For Rent” can be seen outside the warehouse.

Grossman called the discovery “good old work by the police.” He said law enforcement officers with the Internal Security Investigation (HIS) monitored the living space in National City before detection. He said the residence was used as a hiding place during a cocaine smuggling incident back in March, when one person was arrested and about 61 pounds of cocaine were seized.

“For several hours, agents watched as five cars came and went from the cache and this warehouse, we claim the defendants drove to the garage and loaded or unloaded cardboard boxes full of drugs to further move or distribute drugs across the United States. federal agents monitored all the time, ”Grossman said.

He said the vehicles, stash and warehouse were searched, resulting in the seizure and confiscation of drug boxes.

“Today, we accused six people of conspiring to distribute more than 1,750 pounds of cocaine smuggled into the United States, two of the six accused were also accused of trafficking methamphetamine and heroin,” Grossman said.

Officials could not say how long the tunnel existed and whether the warehouse was used for anything else.

According to the U.S. Attorney’s Office, 90 underground passages have been discovered in Southern California since 1993, 27 of which are considered “complex.”

Prior to this last discovery, the last tunnel found in the Southern District was in March 2020.

This story was first reported by Mimi Elkala in KGTV in San Diego.