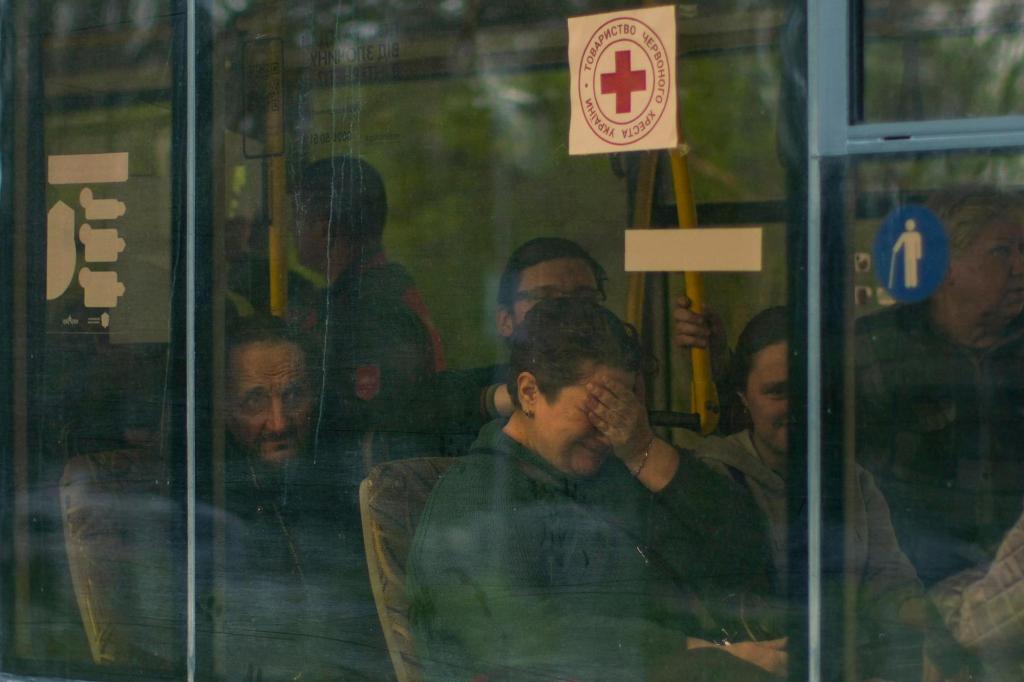 ZAPOROZHIA, Ukraine (AP) – When wet concrete walls deep underground, as well as mold, cold and weeks without fresh fruits and vegetables became unbearable, some in a bunker under Elina Tsybulchenko’s office decided to visit the sky.

Through the darkness, illuminated by flashlights and lamps that power car batteries, they made their way to the cherished place at the metallurgical plant “Azovstal”, which is the last Ukrainian stronghold in the ruined city of Mariupol. There they could look up and see a piece of blue or smoky gray. It was like looking out of the bottom of a well. For those who could not or did not dare to ascend to the surface, it was as far as peace.

But seeing the sky meant hope. That was enough to make Elina’s adult daughter Tatiana cry.

The Tsybulchenko family was one of the first to leave the metallurgical plant during a tense, lengthy day evacuation agreed between the United Nations and the International Committee of the Red Cross with the governments of Russia, which now controls Mariupol, and Ukraine, which wants the city back. . A brief ceasefire has allowed more than 100 civilians to leave the plant.

This week they arrived safely in the city of Zaporozhye in southern Ukraine. There they told the Associated Press about two months at the center of hell and escape.

Hundreds of civilians and Ukrainian fighters remain trapped at the plant as Russian forces break through. The capture of Mariupol is expected to play a central role in Moscow’s May 9 celebration of Victory Day, which historically marks the end of World War II.

In the early days of the Russian invasion, 54-year-old Tsybulchenko was shocked by the bombing of her city. Like many residents who remember the civil defense exercises, she knew that the steel plant has the only real bunkers in the city. When she and her husband Sergei, daughter and son-in-law Igor Trotsky decided to hide in the office under her office, she thought she would stay for a few days.

“We didn’t even take toothbrushes,” Elina said. But a few days turned into 60.

They brought with them only documents, three blankets, two dogs and fruit in a basket that was used for Orthodox Easter. Didn’t think to celebrate the holiday there in a few weeks.

The metallurgical plant has a maze of more than 30 bunkers and tunnels spanning 11 square kilometers (4 miles), and each bunker was its own world. The evacuees had little or no communication with those in other parts of the plant; they eventually met on buses to Zaporozhye and compared experiences.

Their isolation complicates the assessment of the number of civilians and remaining Ukrainian fighters. Several hundred civilians are still trapped, the Ukrainian side said this week, including more than 20 children. It is reported that another evacuation is being carried out on Friday.

The number of survivors under the ground is threatening to decline every day. Some evacuees recalled watching in horror as the wounded died from their injuries when supplies of first aid, even clean water, were lacking or running out.

“People are literally rotting like our jackets,” said 31-year-old Sergei Kuzmenko. A tired factory master along with his wife, 8-year-old daughter and four others fled the bunker; 30 left behind. “They really need our help,” he said. “We need to get them out.”

In another bunker, the Tsybulchanka family lived among 56 people, including 14 children aged 4 to 17. They survived by sharing naked rations, which were beaten by soldiers – canned food, porridge, crackers, salt, sugar, water. It was not enough to get around.

The old family cocker spaniel was suffering, trembling and staring at them wide-eyed. The dog had to die, they decided. It was an act of mercy. They asked the soldier for sleeping pills, but he said the dog could survive and suffer more.

The dog was hastily buried above the ground amid the shelling; Rubble and scrap metal were placed on top of it to protect it from other, hungry pets.

Cosiness was scarce. The bunker shook from the bombing. “So we went to bed every night and thought, ‘Will we survive?’ Said Elina.

Tsybulchanka and others slept on benches full of workers of the metallurgical plant. Buckets were used for toilets. When the bombing became too strong to empty the buckets upstairs, they used plastic bags. To have fun, people composed board games or played cards. One carved pieces of wood into a toy.

The room in the bunker became a playground for children. People found markers and paper and held a arts and crafts competition where children drew what they most wanted to see. Painted nature and the sun. With the onset of Easter in late April painted Easter eggs and bunnies.

Pictures were hung on the walls, dripping with moisture. Mold with the smell of wet color crept from the corners and moved on to clothes and blankets. The only way to keep something dry is to wear it. Onion women even after the evacuation and after the first emotional rains in several months worried that they smelled of mold.

While they tried to collect rainwater, they often used disinfectants to clean themselves and their dishes, to the point that Elin’s hands showed an allergic reaction. In the early days, she went to her office and brought lotion, deodorant and a few other personal items she left there.

Then going higher became too dangerous. Half of the building, including her office, collapsed as a result of the bombing.

Over and over again for two months people in the bunker heard about the possible evacuation from Mariupol, but learned that they had failed. When the news of the evacuation agreed by the UN came, there was skepticism and fear. But planning started with deciding who should leave first.

Others said that Tsybulchanka needed to go because Elina’s convulsive legs began to turn black and give her trouble. “But there are little kids here and they have to go,” she said. The rest insisted. They assumed that the evacuation would continue in the coming days and would take everyone, even the fighters. Some hesitated, wanting to see if the first evacuation was successful.

The little girl left behind, Violetta, took a marker and drew a flower, a heart, and “Good Luck” on Elina’s hand. Residents of the bunker abbreviated the girl’s name to Summer, or “sunlight”.

Everyone in the bunker agreed to meet to celebrate at a coffee shop in Zaporozhye when the evacuation was completed.

“We are very sorry,” Tsybulchanka told others when they came to the surface.

Elina did not recognize her workshop. She tore down the roof. The walls were in ruins. The ground was clogged with craters and littered with unexploded ordnance.

As they emerged from a hole in the blockage, the family and other evacuees blinked. Two months later, sunlight damaged his eyes.

It was quiet. The Russian bombing stopped this time.

“The weather was great,” said Ivan Bachorishvili, deputy head of the UN humanitarian service in Ukraine, who approached the plant to wait for the evacuees. “The one when you expect a perfect thunderstorm, like a blue sky.”

Ahead was a dangerous section. The reception point for the evacuees was a railway bridge near the plant. The waiting buses were another mile away.

The Russians tried to return the mines for evacuation. But the car did not find everything, Bachorishvili said.

When he and a colleague drove up in their car, the Russians shouted from hundreds of meters – “Do not move!” UN workers were ordered to get out and carefully return to the last checkpoint on foot. The demining car was brought again. Eight more mines were found.

Ukrainian soldiers were walking in front and behind the evacuees when they finally came out, making sure a column of people safely put their feet up.

“Thank God we didn’t see any bodies on the way,” Elina said. The Russians removed them.

Twenty-one people appeared on the first day. The others came out next. When the second group met the first, “there were all these hugs and kisses. “They were at Azovstal, but they didn’t see each other, they didn’t know what happened,” said Asnat Lubrani, the UN’s humanitarian aid coordinator in Ukraine.

Buses passed through the ruined city. There were makeshift graves in the streets. People held their heads from grief and disbelief or hugged. “These people will have long nightmares,” said Esteban Saka, a UN official responsible for the first phase of the bus journey to safety.

And yet they still saw signs of life. There was a market day. There were people who walked or rode bicycles, even children. Some peered through the windows of bombed-out buildings.

The evacuees were still far from safe. At first, the buses did not go west towards the territory under Ukrainian rule, but east towards Russia. Even UN staff initially thought they were going there, Saka said.

In the camp in Bezymenny, near the border, the evacuees said they faced pressure from the Russians to side with them. The Russians even tried to get on the buses, saying they wanted to offer the children sweets, but they were released.

A Russian priest asked the evacuees why they were going to Zaporizhia. “Ukraine will soon cease to exist,” Elina Tsybulchenko reminded him.

The evacuees were interrogated and searched, sometimes even undressed to check for military-style tattoos. Some Russians were polite, – said Igor, Elina’s son-in-law. Others mocked or insulted him, especially when he slipped in and spoke Ukrainian instead of Russian. “Why do you speak a foreign language?” They asked.

The buses turned west for a slow route towards Zaporozhye and security. “We’ve always had this fear,” Igor said. “We knew we could go to Russia.”

As the convoy slowly bypassed Mariupol, they could see distant flashes as Russian bombing resumed. Two civilians at the metallurgical plant were killed and 10 civilians were injured, said Deputy Commander of the Ukrainian Regiment “Azov” Svyatoslav Palamar.

Ukrainian authorities say Russian forces have pushed the perimeter of the plant in “heavy, bloody fighting.”

The evacuees entered their bunkers in the winter. They sailed into a black-and-gray landscape, into a grotesque spring. Just passing no man’s land, Elina again noticed the green and yellow fields.

They entered the territory held by the Ukrainians, after harrowing, the final site of more than 20 checkpoints.

Ukrainian officials have urged residents of Russian-controlled communities to board a convoy along the way. But in the end the buses did not let them. Elina and the other evacuees cried as they passed people standing by the road and waiting in vain.

“We were really ashamed,” Elina said. “We never stopped.”