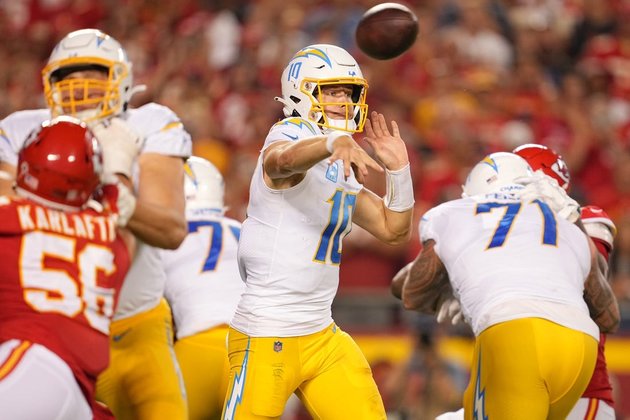 Determined to right what went wrong last week, the Los Angeles Chargers will bring a cautious approach when they host the Jacksonville Jaguars on Sunday in Inglewood, Calif.

Chargers quarterback Justin Herbert is listed as day-to-day with a fractured rib cartilage on his left side. Herbert, who was injured in the second half of Thursday night’s 27-24 win over the Kansas City Chiefs, will need an extra few days to recover.

Herbert was limited to light throws in Wednesday’s practice while doing some rotational work to help his recovery. He worked on passes to the running backs, earning the disabled list tag.

For now, the Chargers (1-1) say Herbert will make the first call on whether he’s ready to play Sunday. The coaching staff will then make the final decision.

“Just making sure that Justin feels like he can do the job the way you know he can do it,” Los Angeles coach Brandon Staley told reporters Wednesday. “That’s the important thing, just him having the confidence to be able to play the game the way it needs to be played. That will be determined as the week goes on, before the game.”

If Herbert is unavailable, either Chase Daniel or Easton Stick will take the snap against the Jaguars. Both repeated with the first team on Wednesday.

Even after he was injured against the Chiefs, Herbert stayed in the game and scored a touchdown with 1:11 left to end the game. But the Chiefs recovered the next onside and closed out the victory.

Also limited at Chargers practice Wednesday with hamstring injuries were wide receiver Keenan Allen and tight end Donald Parham Jr. Allen had four catches in the season-opening win against the Las Vegas Raiders, but did not play against the Chiefs.

Los Angeles is also looking to get star running back Austin Ekeler on track. The multi-purpose back has just 75 yards on 28 carries and 13 receptions for 91 yards. He didn’t score a touchdown.

The Jaguars (1-1) hit the road after an impressive 24-0 win over the Indianapolis Colts last week. Jacksonville’s defense had five sacks and held 2021 rushing champion Jonathan Taylor to 54 yards on nine carries in a week after he had 161 yards on the ground.

On offense, quarterback Trevor Lawrence was 25 of 30 for 235 yards and no interceptions with a pair of TD passes to Christian Kirk.

“You don’t just chance a win like we did on Sunday,” Lawrence said. “The preparation to get there, the focus, those things, you just keep repeating it. This is the most important thing. That’s the positive you take from it and you just try to do it again and again.

“As for that result, it’s not going to win you a game on Sunday. You have to follow your processes and do it every day of the week.”

The win moved the Jaguars into sole possession of the AFC South lead for the first time since the same week of the 2018 season.

Jacksonville’s defense allowed just 28 points, third in the AFC behind the Denver Broncos (26) and Buffalo Bills (17).

While the Chargers are dealing with key injuries, the Jaguars have no one listed on the midweek injury report.

“Knock on wood, it was good,” Jacksonville head coach Doug Pederson said. “It’s a credit to the players and the way they’ve worked in the gym, their conditioning. Both games came out pretty clean apart from a few bumps and bruises.”