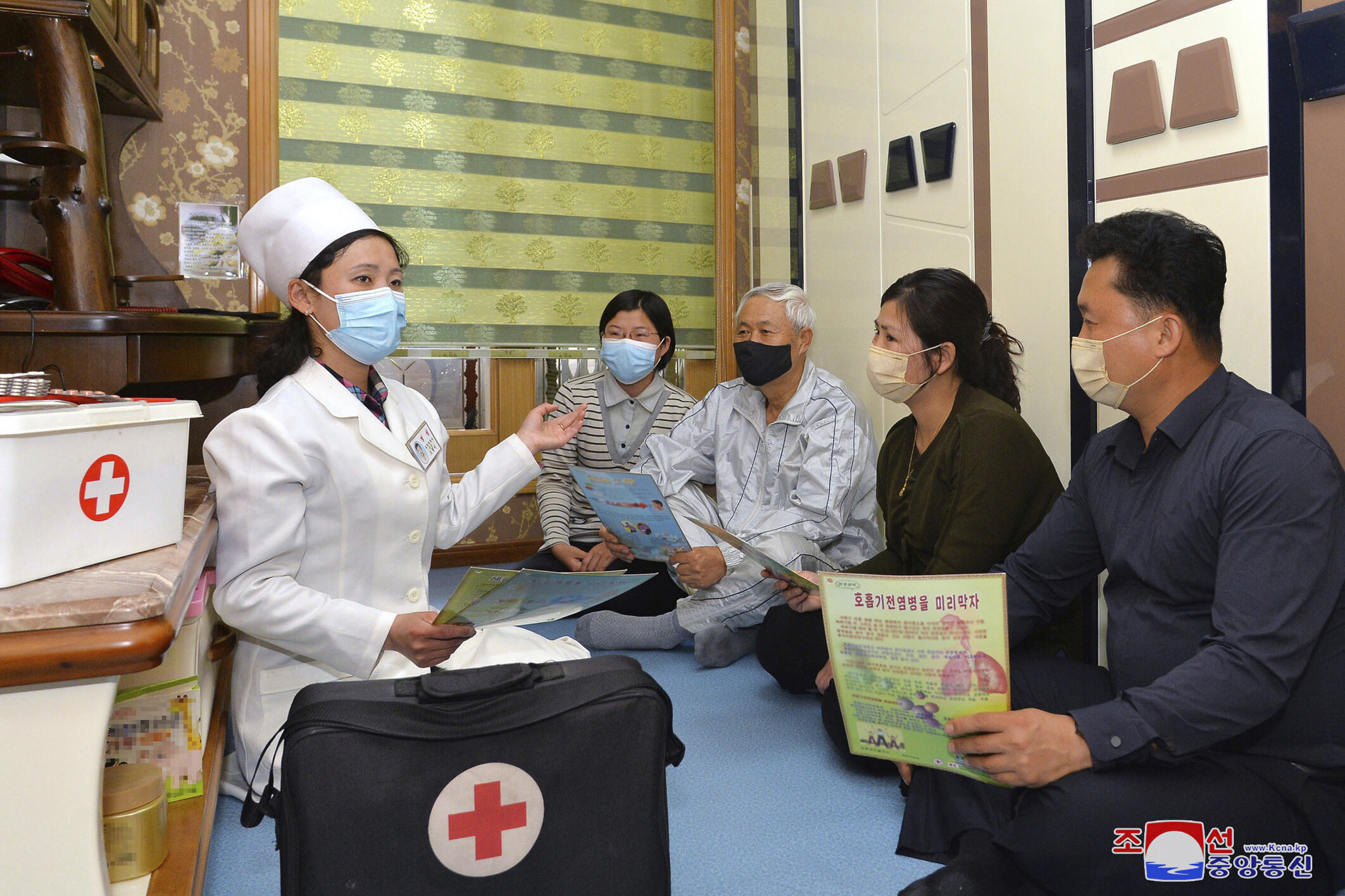 North Korea said Wednesday more than a million people have already recovered from suspected COVID-19 just a week after disclosing an outbreak it appears to be trying to manage in isolation as global experts express deep concern about the public health threat.

The country’s anti-virus headquarters announced 232,880 new cases of fever and another six deaths in state media Wednesday. Those figures raise its totals to 62 deaths and more than 1.7 million fever cases since late April. It said at least 691,170 remain in quarantine.

Outside experts believe most of the fevers are COVID-19 but North Korea lacks tests to confirm so many. The outbreak is almost certainly larger than the fever tally, since some virus carriers may not develop fevers or other symptoms.

It’s also unclear how more than a million people recovered so quickly when limited medicine, medical equipment and health facilities exist to treat the country’s impoverished, unvaccinated population of 26 million. Some experts say the North could be simply releasing people from quarantine after their fevers subside.

Globally, COVID-19 has killed about 6.3 million people with the true toll believed to be much higher. Countries with outbreaks of a similar size to North Korea’s official fever tally have confirmed thousands of deaths each.

World Health Organization Director-General Tedros Adhanom Ghebreyesus said Tuesday that North Korea has not responded to its request for more data about its outbreak.

Before acknowledging COVID-19 infections for the first time last week, North Korea had held to a widely doubted claim of keeping out the virus. It also shunned millions of vaccine shots offered by the U.N.-backed COVAX distribution program, likely because of international monitoring requirements attached to them.

North Korea and Eritrea are the only sovereign U.N.-member countries not to have rolled out vaccines, but Tedros said neither country has responded to WHO’s offers of vaccines, medicines, tests and technical support.

“WHO is deeply concerned at the risk of further spread in (North Korea),” Tedros said, also noting the country has worrying numbers of people with underlying conditions that make them more likely to get severe COVID-19.

WHO emergencies chief Dr. Michael Ryan said unchecked transmission of the virus could lead to new variants but that WHO was powerless to act unless countries accepted its help.

The North has so far ignored rival South Korea’s offer to provide vaccines, medicine and health personnel, but experts say the North may be more willing to accept help from its main ally China. South Korea’s government said it couldn’t confirm media reports that North Korea flew multiple planes to bring back emergency supplies from China on Tuesday.

North Korean officials during a ruling party Politburo meeting Tuesday continued to express confidence that the country could overcome the crisis on its own, with the Politburo members discussing ways for “continuously maintaining the good chance in the overall epidemic prevention front,” the official Korean Central News Agency said Wednesday.

There’s suspicion that North Korea is underreporting deaths to soften the blow for Kim, who already was navigating the toughest moment of his decade in power. The pandemic has further damaged an economy already broken by mismanagement and U.S.-led sanctions over Kim’s nuclear weapons and missiles development.

At the Politburo meeting, Kim criticized officials over their early pandemic response, which he said underscored “immaturity in the state capacity for coping with the crisis” and he blamed the country’s vulnerability on their “non-positive attitude, slackness and non-activity,” KCNA said.

He urged officials to strengthen virus controls at workplaces and redouble efforts to improve the supply of daily necessities and stabilize living conditions, the report said.

North Korea has also deployed nearly 3,000 military medical officers to help deliver medicine to pharmacies and deployed public health officials, teachers and students studying health care to identify people with fevers so they could be quarantined. The country has been relying on finding people with symptoms and isolating them at shelters since it lacks vaccines, high-tech medicine and equipment, and intensive care units that lowered hospitalizations and deaths in other nations.

While raising alarm over the outbreak, Kim has also stressed that his economic goals should be met. State media reports show large groups of workers are continuing to gather at farms, mining facilities, power stations and construction sites, being driven to ensure their works are “propelled as scheduled.”

North Korea’s COVID-19 outbreak came amid a provocative run in weapons demonstrations, including its first test of an intercontinental ballistic missile in nearly five years, in a brinkmanship aimed at forcing the United States to accept the idea of the North as a nuclear power and negotiate economic and security concessions from a position of strength.

Kim Jong Un during Tuesday’s Politburo meeting affirmed he would “arouse the whole party like (an) active volcano once again under the state emergency situation” to prove its leadership before history and time and “defend the wellbeing of the country and the people without fail and demonstrate to the whole world the strength and the spirit of heroic Korea once again,” KCNA said. The report did not make a direct reference to a major weapons test.

Recent commercial satellite images of the nuclear testing ground in Punggye-ri indicate refurbishment work and preparations at a yet unused tunnel on the southern part of the site, which is presumably nearing completion to host a nuclear test, according to an analysis released Tuesday by Beyond Parallel, a website run by the Washington-based Center for Strategic and International Studies.

© 2022 The Associated Press. All rights reserved. This material may not be published, broadcast, rewritten or redistributed without permission.

Citation:
North Korea hails recovery as WHO worries over missing data (2022, May 18)
retrieved 18 May 2022
from https://medicalxpress.com/news/2022-05-north-korea-hails-recovery.html

This document is subject to copyright. Apart from any fair dealing for the purpose of private study or research, no
part may be reproduced without the written permission. The content is provided for information purposes only.

Previous post The hottest ticket to Depp’s court against Hurd, the scalpers, shout matches behind the seats
Next post Natik’s keeper, a canteen worker rescues the student from suffocation