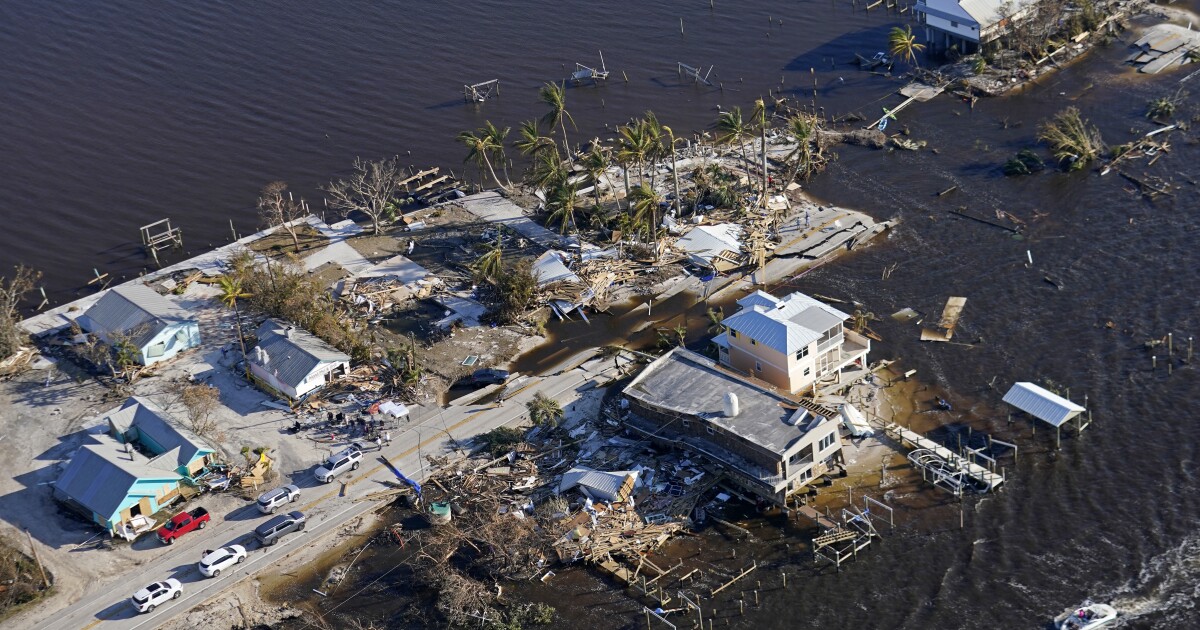 Hundreds of thousands of people are still without power days after Hurricane Ian slammed into Florida’s southwest coast and made its way to the Carolinas.

Florida, where nearly four dozen people were reported dead, was the hardest hit by the Category 4 hurricane, one of the strongest to hit the US. Flooded roads and washed-out bridges to barrier islands have left many people isolated amid limited cell phone service and a lack of basic amenities such as water, electricity and internet.

Florida utilities were working to restore power. As of Sunday morning, nearly 850,000 homes and businesses were still without power, down from a peak of 2.67 million.

The weakened storm headed north on Sunday and is expected to dump rain in parts of Virginia, West Virginia, Maryland and southern Pennsylvania, according to the National Hurricane Center, which is warning of the possibility of flash flooding.

More than 1,000 people have been rescued from flooded areas along Florida’s southwest coast alone, Daniel Hokanson, a four-star general and head of the National Guard, told The Associated Press on a flight to Florida.

The Pine Island Bridge, the largest barrier island off Florida’s Gulf Coast, was destroyed by the storm, leaving it accessible only by boat or air. The Medic Corps, a volunteer group that responds to natural disasters around the world with pilots, paramedics and doctors, went door-to-door asking residents if they wanted to evacuate.

Some flew out by helicopter, and people described the horror would be trapped in their homes as the water continued to rise.

“The water kept hitting the house and we watched, boats, houses – we watched everything go by,” said Joe Conforti, fighting back tears. He said that if it wasn’t for his wife who suggested they stand on the table to avoid the water rising, he wouldn’t have made it: “I started to lose my senses because when the water is in your door and splashes on the door and you see how fast they move, there’s no way you’ll survive it.”

Flooded rivers sometimes became a serious problem for rescue and delivery of goods. The Miakka River washed out on a stretch of Interstate 75, causing the highway to be closed to traffic for a while before officials said it could be reopened later Saturday.

Although swollen rivers are at or near their crest, levels are not expected to drop significantly for several days, National Weather Service meteorologist Tyler Fleming said.

Elsewhere, Pauley Island in South Carolina, a beach town about 75 miles (115 kilometers) up the coast from Charleston, was also hard hit. At least half of the island remained without electricity on Saturday.

Eddie Wilder, who has been coming to Pawleys Island for more than six decades, said it was “crazy” to see waves of up to 25 feet (7.6 meters) washing away the famous pier near his home.

In North Carolina, the storm knocked down trees and power lines. Two of the state’s four deaths were from storm-related car crashes, while the others included a man who drowned when his truck plunged into a swamp and another from carbon monoxide poisoning from a generator in a garage.

Puerto Rico is still trying to recover from Hurricane Fiona, which hit the island on September 16. More than 150,000 people remain without power in Puerto Rico.

Previous post Patricia Gibson MP: The Tory government’s mini-budget is disastrous
Next post See the forecast for a powerful new hurricane in the Pacific Ocean

California prosecutors say a 66-year-old man has been charged in connection with the shooting of an unarmed man who was...

A California a couple rescued a man who got lost in the mountains for two weeks and survived on only...

A family's 15-year-old German shepherd jumped into what appeared to be a sinkhole near their California home, officials and several...

"Hollywood Cat," the California mountain lion known as P-22 who killed two dogs and was behaving strangely, must be captured,...

LOS ANGELES (AP) — A mountain lion that biologists had been tracking in the mountains near Los Angeles gave birth...